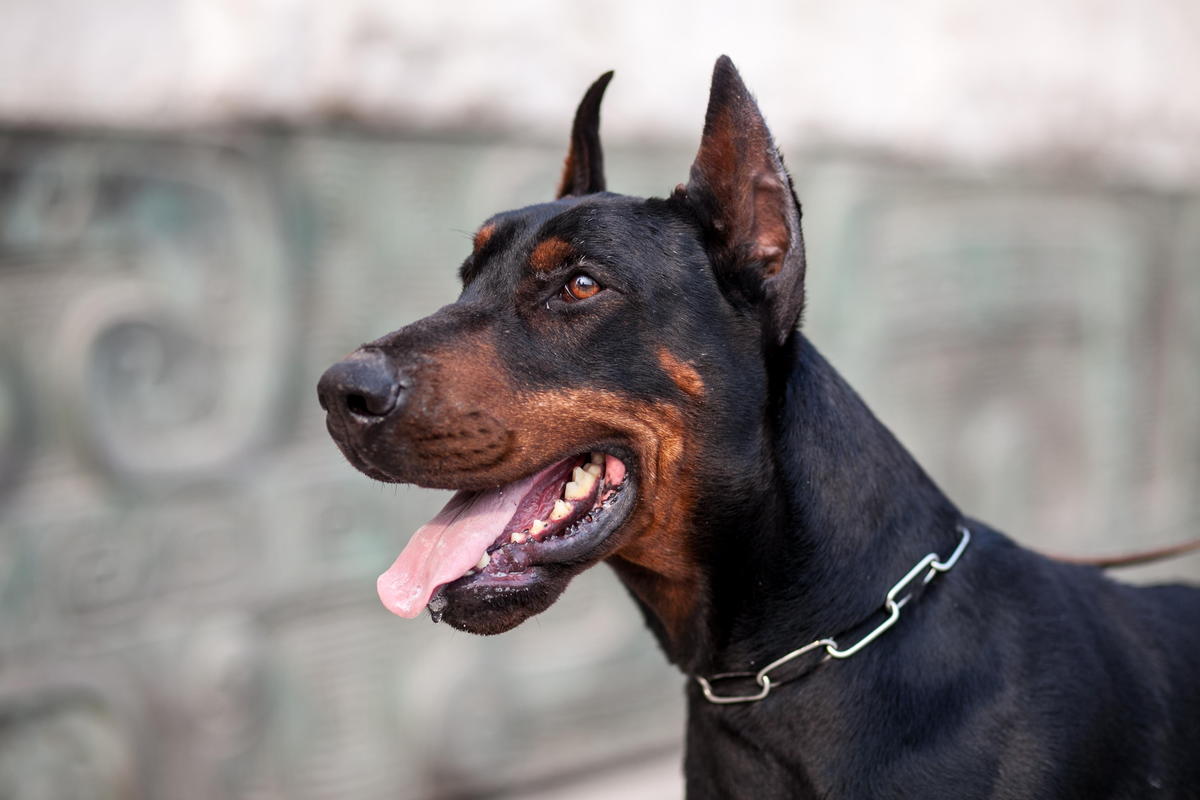 While traditionally black dogs with rust and/or brown markings, Doberman Pinschers are actually found in a handful of colors, such as blue (grey) and even tan dispositions. Their muscular bodies average a medium-large size, about 24-28 inches tall at the shoulder and range in weight between 85-90 pounds. They are built strong and boxy and are commonly found to have ears that are cropped and stand erect on the head.

The Doberman Pincher, also known as a Doberman or Dobie, has a unique story… In Germany, around 1890, a tax collector named Louis Dobermann decided that he needed a guard dog to protect the money that he collected from potential thieves. Due to the easy temperament and loyalty fostered in the breed, Louis Dobermann realized that these dogs also make excellent companions and pets. The American Kennel Club later recognized the breed in 1908.

Given their background as a guard dog and that they can sometimes look intimating, and are cast that way in many movies and television shows, the stereotype of this breed is that they are tough and aggressive. Most Doberman pet owners, however, would disagree, saying that the breed is loyal and very friendly.

Since they are strong, have a high endurance and are intelligent, they make great police dogs, guard dogs and military workers. They are also great pets and make attentive guard dogs, but they do tend to bark often at noises around the house – better safe than sorry!

They are intelligent dogs and learn very quickly with commands; therefore they do well in environments that are stimulating to them – craving mental challenges. To keep them from becoming bored, especially when young, the ideal owner will enlist in a training or agility class, along with seeking out consistent exercise.

Like all breeds, there are some potential health concerns that pet owners should pay special attention to with Doberman Pinschers. The most common health issue found in this breed is cardiomyopathy, a heart condition. Animal Hospital of Woodstock offers Holter monitoring, a 24-hour ECG that electrically records each heart beat for a full day, followed by an evaluation of the data. Once analyzed, this data helps us as either a diagnostic assessment of heart disease or can be used to screen breeding animals in susceptible breeds, such as Dobermans. This is a very serious illness, so annual check-ups are recommended and it’s encouraged to spay or neuter dogs with cardiomyopathy.

For more information about Dobermans visit their American Kennel Club website. Interested in a Doberman Pinscher or similar breed? The AHOW staff is happy to help.